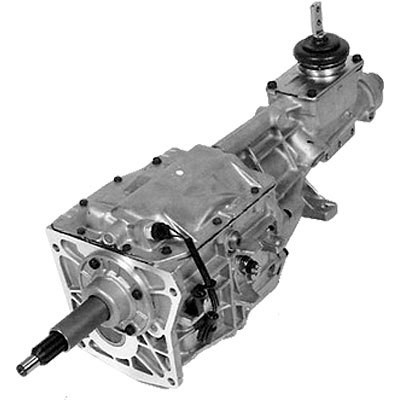 The Tremec design T-5  5 speed transmission has been around since the early 80's. "World Class" models were introduced in 1985. These transmissions feature tapered roller bearings on the cluster, caged needle bearings under the 1st, 2nd and 3rd speed gears on the mainshaft, double synchronizers on 1st and 2nd and steel blocker rings with bonded friction materials. Ford adopted this configuration for 1985 and up production T5's. Similarly, all Ford aftermarket T-5 applications have been "World Class" since 1985. As the demands on this transmission were increased, gear materials were upgraded (8620 to 4620 to4615) and blocker ring lining materials went from paper to carbon fibre.

In 1993 the pocket bearing between the input and mainshaft was changed from a needle bearing to a tapered roller bearing. This was only used in production on the '93-95 Mustang Cobra T5's but was adopted on many high performance aftermarket T-5 applications including the AA251 shown below. The T-5 design and manufacturing rights were purchased by Tremec in 1996 and is still being produced in Mexico. Check out our Specials section for surplus 3.35 T5's that we frequently come across.